Tisha Schuller welcomes Alan Armstrong, president and CEO of Williams, to the Real Decarbonization podcast. Listeners will hear about the meaningful work Williams is doing leading into a low-carbon future.

Alan became CEO and president of Williams in January 2011 after working as the company’s SVP of Midstream operations. He started working at the company as an engineer in 1986 and later served in positions including VP of Gathering and Processing (1999-2002), VP of Commercial Development (1998-1999), VP of Retail Energy Services (1997-1998), and Director of Commercial Operations for midstream business in the Gulf Coast region (1995-1997). Alan serves on the National Petroleum Council where he is vice chair. He also is a member of many boards including the American Petroleum Institute, the Energy Infrastructure Council, and The Williams Foundation. Some of the boards he serves on are for educational organizations, such as the Board of Trustees for The University of Oklahoma Foundation and 3DE. Alan received a bachelor’s degree in civil engineering from the University of Oklahoma in 1985.

Thanks to Lindsey Slaughter and Adán Rubio, who make the Real Decarbonization podcast possible. 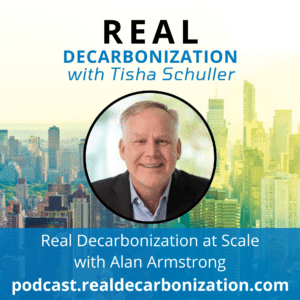