Should O&G Support a Carbon Tax?

Majkut characterizes himself as both a political moderate and a climate hawk. In today’s episode, Majkut makes the case for a carbon tax and gives his perspective on why it is in the oil and gas industry’s interest to start leading the discussion.

The world is heading directionally toward net-zero emissions. The time to “wait-it-out” has passed.

In this episode, we dive into:

Also, listen in to hear about Majkut’s big idea on decarbonization he pitched via Twitter to Jeff Bezos.

Joseph Majkut is the Director of Climate Policy at the Niskanen Center in Washington, D.C. and is a respected expert in climate science and climate policy. Majkut publishes numerous research articles for the Niskanen Center and prior to his present role, he has worked as a Congressional Science Fellow for the U.S. Senate. Majkut holds a PhD in Atmospheric and Oceanic Science from Princeton, a M.S. in Applied Mathematics from Delft University of Technology, and a B.S. in Mathematics from Harvey Mudd College.

Thanks to Lindsey Gage, Michael Tanner, and Scott Marshall who have made the Energy Thinks podcast possible. 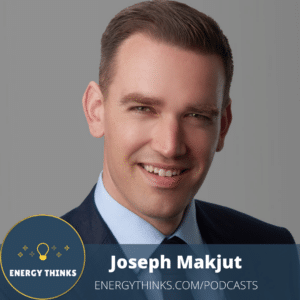