How will November’s election direct the U.S. energy future?

Tisha Schuller sits down with Marty Durbin, President of the Global Energy Institute at the U.S. Chamber of Commerce, and Elizabeth Gore, Senior Vice President of Political Affairs at the Environmental Defense Fund (EDF), to discuss how energy companies can minimize risk heading into the 2020 presidential election.

In today’s episode, we explore answers to the following political questions:

Marty Durbin is the President of the Global Energy Institute for the U.S. Chamber of Commerce.  Prior to his current role, Durbin served as the Executive Vice President and Chief Strategy Officer at the American Petroleum Officer.  He also served as the CEO of America’s Natural Gas Alliance (ANGA).  Durbin holds a Bachelor’s degree in government from the University of Maryland.

Elizabeth Gore, Senior Vice President, Political Affairs, Environmental Defense Fund.  Gore brings the perspective of decades of experience working in Washington D.C. and has held many senior positions in the U.S. House of Representatives, the Office of Management and Budget, and the U.S. Senate.  Gore holds a Bachelor’s degree in economics from Swarthmore College. 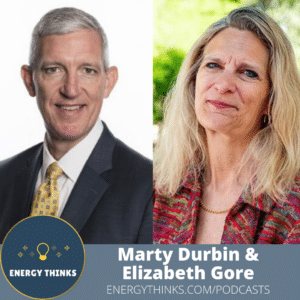