How to Lead the Energy Transition with Xcel’s Alice Jackson

Tisha Schuller welcomes Alice Jackson, former president of Xcel Energy – Colorado, to the Energy Thinks Podcast. Since the recording of this episode, Alice has been promoted to chief planning officer and senior vice president of System Strategy at Xcel Energy.

Listen here for the Coal at Sunset: A Colorado Town in Transition podcast mentioned in this episode.

Alice started working in GTT and IT positions at companies including Enron Energy Services and Oxy before becoming director of energy ventures at Oxy in 2004. She became the regional VP of rates and regulatory affairs at Xcel in Amarillo, TX in 2011 and served in the same position a few years later in Denver, CO. While in Denver in 2016, Alice earned the title of VP of strategic revenue initiatives, which she held until May 2018 when she became president of Xcel in Colorado. She also has been a board member of the American Red Cross (donate here) since 2015. Alice has a B.S. in management information systems from Texas A&M University and has completed the Program for Leadership Development at Harvard Business School. 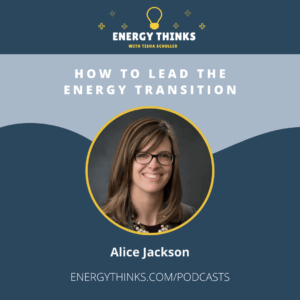