In this special edition of Energy Thinks, hear Tisha Schuller’s conversation on the #hottakeoftheday podcast with host David Ramsden-Wood, a.k.a. DRW.

DRW started his career in the energy industry as a reservoir engineer at Anadarko in 2001. He later became the co-founder and COO of OneEnergy Partners, which was sold in November 2018. In an effort to publish his book, “What the F@&K is Wrong with Everybody Else? (What They Didn’t Teach You in Business School),” he started posting his “hot take of the day” on LinkedIn. From this, the #hottakeoftheday became a website and podcast. DRW has a B.E. in chemical engineering from the University of Calgary and an MBA from Cornell University.

Special thanks to DRW for letting Adamantine share this episode with its audience. Thanks to Lindsey Slaughter, Adán Rubio, and Michael Tanner who make the Energy Thinks podcast possible. 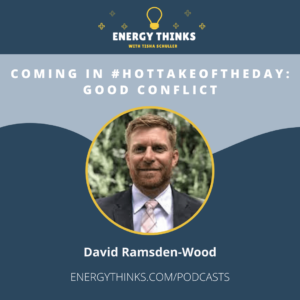