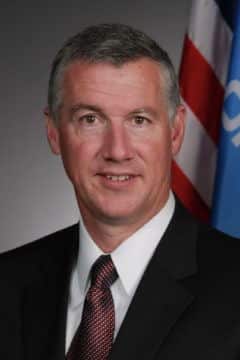 Michael Teague is the strategic advisor and systems integrator for Adamantine Energy. Mike brings to Adamantine deep expertise in energy negotiations and solutions facilitation, drawn from his experience at the cabinet level of state government as well as from a 28-year career in the U.S. Army.

As Oklahoma’s first secretary of energy and environment in the cabinet of Governor Mary Fallin, Mike became highly respected by parties across traditional political and development divides, from the oil, gas and renewable energy sectors to environmentalists, from policymakers to Native American tribal leaders.

Mike’s most celebrated accomplishment during his tenure as secretary was spearheading a transparent, multi-stakeholder state coordinating council that traced Oklahoma’s recent rash of earthquakes to disposal wells for the water produced during oil and gas drilling and production. The council proposed solutions for curtailing the induced seismicity’s frequency and impact — solutions that have reduced earthquakes in Oklahoma nearly five-fold since the council began its work. The council’s work has also become a model in Oklahoma for solving contentious issues — from autonomous vehicle safety to how to use produced water for drought resilience — collaboratively and without regulation.

Prior to his appointment to secretary, Mike also accrued a wealth of international and domestic experience in energy and environment solutions from his nearly three-decade-long active duty Army career. Before retiring with the rank of colonel in 2013, Mike dealt with power generation and distribution, water desalinization and environmental impact studies. He also facilitated and negotiated numerous solutions among federal and state agencies, Native American tribes and local stakeholders.

During his Army career, Mike was deployed to four continents, including several times to the Middle East as well as to Central America. He commanded the 52nd Engineer Battalion in Mosul, Iraq in support of the 101st Airborne Division as part of Operation Iraqi Freedom in 2003. He also served as commander for the Tulsa District of the U.S. Army Corps of Engineers from 2010 to 2013, where he oversaw more than 700 employees and an annual budget of $700 million.

Mike received a bachelor’s degree in Civil Engineering from Norwich University. He also received master’s degrees in Operations Analysis from the Naval Postgraduate School and in National Security and Strategic Studies from the Naval War College.

Mike lives in Tulsa with his wife and enjoys spending time with his three children and two grandsons.