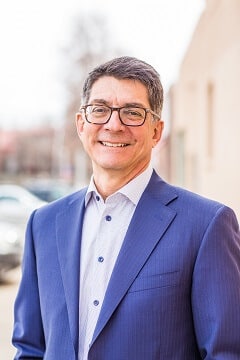 Matt’s skillset and experience broaden and deepen Adamantine Energy’s capacity to transcend conflict around energy projects and forge enduring solutions.  Matt works with clients at the leadership, executive and board levels, guiding them to evolve their business strategies to reduce and transform their political and policy risk.

Prior to joining Adamantine Energy in 2018, Matt was the director for five and a half years of the Colorado Oil and Gas Conservation Commission (COGCC), the agency that regulates oil and gas exploration and production in Colorado.  As the shale revolution took hold and the state’s oil production tripled, Matt encountered the passions on all sides of energy development projects — and developed deep expertise on how to navigate those passions to find the pragmatic middle.  Through 13 agency rulemakings, Matt worked to prioritize transparency and access for all affected stakeholders in the Commission’s regulatory processes and decision-making.

Prior to his tenure as COGCC director, Matt served as a Colorado Assistant Attorney General, where he represented the Oil and Gas Commission in all litigation matters before state trial and appellate courts and counseled the Commission on regulatory and enforcement matters.  Matt was a partner in the law firms Holme Roberts & Owen, LLP, and later Beatty & Wozniak, P.C., where he practiced environmental and natural resources law before joining the public sector.

Matt has consulted with industry, NGOs, and national, provincial, and municipal governments in Indonesia, Chile, Argentina, Columbia, and South Africa regarding political, policy, and regulatory aspects of unconventional oil and gas development in conjunction with the U.S. Departments of State and Commerce.  Matt also has been an invited participant in the Aspen Institute Energy & Environment Program Series on Energy Governance seven times between July 2014 and August 2018.